I returned from my usual Turkey Creek hike last evening with Eleanor and Beatrice to find this photo from Megan.

While Doc Randall and mum, better known as my parents, are traversing Tanzania and sending me elephant photos at every opportunity, their third-child-in-everything-but-genetics child Megan stays at the house. She feeds the dogs, feeds the horses, makes certain that the garage cats are warm and fed, and that the house doesn’t blow away. This may not sound like much, but it’s a full-time gig and then some, especially when you consider that she has a rambunctious crew of her own back at the ranch.

This reminds me that I should probably do something really nice for Megan, except that I cannot think of anything nice enough for her except to write about what a lovely person she is, and I don’t think that is near nice enough.

Back to the photo, which is adorable but does require some explanation. Whenever the front door to the house is opened, all Randall dogs sprint out, barking and running in happy circles. Once they have greeted the day and tried to scare the garage cats back into the garage, they all pile into the Kubota. They lovelovelovelovelove the Kubota. It is their favorite thing besides hikes up in the hills and biscuit time and belly rubs and begging at the table and all piling into bed. You’d be surprised how many large dogs can stuff themselves into a motorized vehicle slightly larger than a golf cart all in an effort so that they get to ride to an adventure instead of walking there on their own four paws. They have yet to understand that the Kubota doesn’t move unless they leave room for a human in the driver’s seat. And even if you do manage to wedge yourself in there, you’ll still have to drive with a dog on your lap.

This was the resulting chat between Megan and me. Bloody stupid autocorrect, but on the bright, Dad’s favorite feed truck, the Valdez, was on the receiving end of an almost compliment. Dinosaurs roamed the earth the last time that happened. 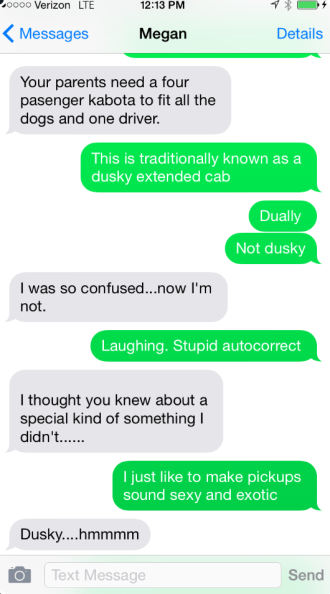 But Daisy is home, much to the joy of the Mansfield three. She may never get out side again to do cat things in the dead of night, but she is home and safe and loved, even if she used up all nine of her lives on her seven-month outdoor adventure.

Megan posted this morning that it was downright cold this morning when she was out feeding. When I asked her if she had any room in the Kubota as a reward for her efforts, she said that Bob 2.0 drove while she ran along behind. I chuckled, but something tells me that there is more than a grain of truth to her story. Mum asked her if she had had any luck teaching Bob 2.0 to drive, but as Great Pyrenees dogs train you, not you train them, training Bob will fall back to mum.

Ah, the joys of winter in Montana!