One of my favorite parts of working up at Bridger Vet a few years ago was that I got to see the photos first. You see, in addition to the blog site, we have a Facebook page for the clinic. A very active Facebook page. You might see photos of a dog waiting to see a vet, of my mum being towed in the MHT, or of a pony wearing duct-tape booties. But you’ll also see photos that people send us of their dogs, their horses, the cattle, and their children. Those photos, my friends, come directly to me, and they’re awesome. It’s impossible to have a bad day when you have photographic evidence of someone kissing a cow or of tiny goats in all their dappled glory. Bridger Vet is living proof that animals are family and much-loved family members at that.

Gwynn Tobel is one of my most reliable photographers and contributors, but then again, if I had a family and ranch as photogenic as she and Jeremy do, I’d chuck my pen/keyboard for a camera in a heartbeat. Back when she was Gwynn Matthews, Gwynn was a student at Rocky Mountain College when both mum and dad were teaching. After graduation, Gwynn married Jeremy Tobel, and they moved to a ranch over near Joliet. Two kids, Makenna and Chantz, some cattle, horses, and a couple of clownlike dogs later, I think they might have discovered the American dream or at least the wormhole to effervescent joy.

This is Atticus, who is likely the world’s most tolerant dog.

And if you think Atticus is photogenic and tolerant, here are both Makenna and Chantz taking Yogi and Jessie through their paces. 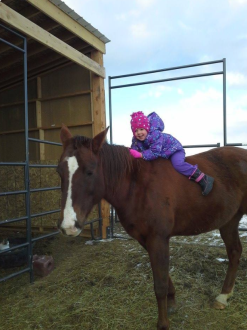 If this wasn’t enough, even the Tobel’s cattle are broke to hand feed. (This is what happens when you keep grown-up bucket calves in the pasture.)

I must say that I get a HUGE kick out of the photos that Gwynn sends. Atticus is part clown, part mother hen, part stalker, but he is all love for Makenna and Chantz. He shares in their naps, eats the parts of their meals that they don’t like, lets them dress him up, lets them hide him in the blanket fort, but he always always always keeps a watchful eye on them. The horses, Yogi and Jessie, let the kids clamber up on them, hug them, invade their personal space, but even they do their best nanny acts. Heck, the cows don’t want to be left out, so they join in the act by eating sandwich bread (a favorite of grown-up bottle calves everywhere) straight from Makenna’s hand.

Are animals a lot of work? Absolutely. But animals teach nearly as much as they give. Unconditional love. Stewardship. Responsibility. Caring for those that depend on you. If you ever needed a reason as to why letting your kids grow up around animals, the Tobel kids are living proof as to why it works. They’re loving, enthusiastic, and comfortable with their animals, and they will grow up to carry those qualities with them. So good on you, Gwynn and Jeremy, for having an inclusive family, one that involves two-legged children as well as those with four. Makenna and Chantz will grow up that much richer because of their family.