About a year ago, my mum called up, ecstatic. She’d found a Great Pyrenees (that giant white beast next to the boy about to undergo yet another growth spurt) that needed a home, and she had just the dog bed for him. Enter Bob, named in memory of Poppa Bob. Bob can countersurf while keeping all four feet on the floor and likes to keep track of all people and dogs while out hiking. He is his own dog, a bit ambivalent about coming when called, and exudes great passion when chasing the owl from one side of the house to the other. We have yet to find a lint or hair catcher that can deal with him.

He is also kind, exceedingly gentle, and as you can see, the very best kind of friend. 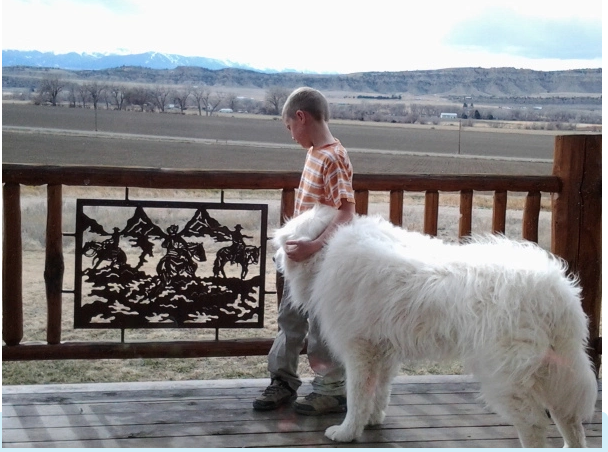 Jack is Megan’s oldest son,  and he grew up wearing superhero costumes. The Superman costume was a given, the Batman costume resulted from his naming his bucket calf Batgirl, and when my mum and I went to Sweden, we managed to procure a Viking costume for him. (My husband got nothing, but I traipsed through several Swedish cities looking for a Viking costume for Jack.) I haven’t seen Jack in costume as of late, but if Bob leans on him much more, he’ll have enough dog hair on him to be a Great Pyrenees himself.

What I love about this photo is its quiet love, the trust that each has in the other. Bob knows that Jack is good for a lean and a scratch, and Jack knows that Bob’s watchful eye will follow him wherever he goes. Both are at complete peace, an idyllic moment.