Imagine this text exchange between me and Heather in early May of this year.

Erin: Lyle Lovett and His Large Band are playing at Red Rocks on July 24th. I must confess that I’m trying to think of a way to make this happen.

Heather: OMG I would so be in for that!

Erin: This summer might feature a lot of me working remotely while at airports.

Heather: Did you see that Nitty Gritty Dirt Band is opening for him!?!?!

And that, my friends, is how Heather came down from Billings and I flew up from Austin to meet in Denver, just to see Lyle and to sing along with “Fishin’ in the Dark.”

Heather and I grew up in barns in Montana, she up by her grandmother’s place and me down by the vet clinic and railroad tracks. We’d clean stalls in the mornings to the sounds of KGHL, a station–and the only station we could get–out of Billings, Montana, that made certain we were acquainted with Alabama, George Strait, and Reba McEntire. On Sunday mornings, Lonny Bell’s Classic Country show would be on, which is why I can sing along to “Little Jimmy Brown,” “Kaw-Liga,” and most any George Jones song. Nowadays, Heather is married and has a little boy along with a raging sense of adventure. She wants to ride horses on every continent, and she’s more than halfway there as she has ticked Ireland, Mongolia, Tasmania, and fairgrounds across North America off her list. You can see why she is the one that I called when I discovered where Lyle would be in July.

If you’ve never been to a concert at Red Rocks, add the venue to your must-see list. It’s a gorgeous venue with views of Denver and the surrounding foothills. Heather and I drove up a bit early, anticipating some time to wander, but instead, we got to wait in line. We made friends with the people next to us who regaled us with tales of seeing Joni Mitchell back in the day. And bonus of being relatively young at a concert: we can navigate stairs to beer lines more rapidly. 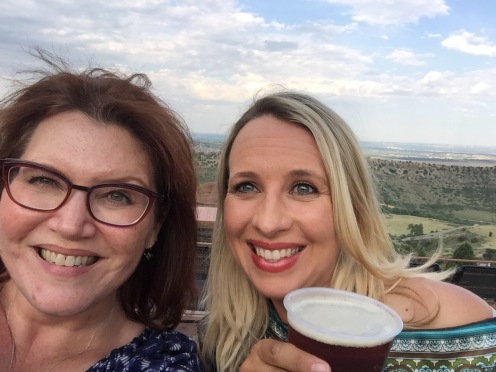 Nitty Gritty Dirt Band opened, playing songs that I’d forgotten that I knew: “Mr. Bojangles,” “Dance, Little Jean,” this lovely old song about a little girl dancing at her parents’ wedding, “Bless the Broken Road,” and yes, “Fishin’ in the Dark.” (Go ahead, I dare you to try and not sing along to that song. Not possible.) We tried to not step in the sticky banana daiquiri that the couple in front of us thoughtfully spilled, And Heather can pick some humdinger seats. We were in the dead center of the fifth row, conveniently near everything. I didn’t even have to use the zoom function on my camera for photos! 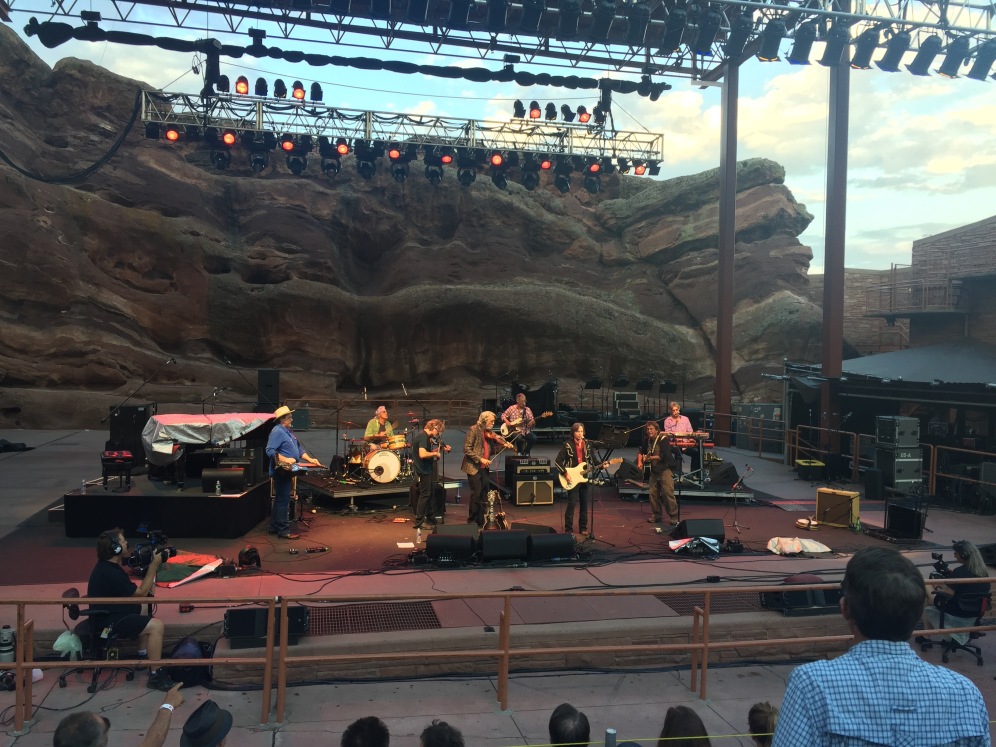 And finally–finally!–Lyle came on stage. His Large Band is the real deal: a Muscle Shoals horn section, pianist, steel guitar, banjo, bass, a blues singer, and a when the song called for it, a gospel choir. He was on stage a good three hours, singing everything from “If I Had a Boat” to “Nobody Knows Me” to “Church” to “Keep It in the Pantry.” You want a good time? Go see Lyle.  His stage shows are a lesson in craftsmanship and charisma and fun. Musicians, if you want a long career in music, there are few to emulate than Lyle.

I’ve gotten some odd looks over the years when I wax poetic about Lyle Lovett. (I’m also quite fond of Patrick Stewart, so clearly I have great taste.) Lyle is interesting. He’s funny. He’s a great musician and a darn good actor. Ever see “Short Cuts,” the Robert Altman film from the early ’90s? Lyle Lovett is in there. He’s also the lineman that marries Paul and Jaime Buchman in “Mad about You.” My husband and I are still bummed that his most recent acting foray, “The Bridge,” is off the air. That show had good writing and Lyle had a great hat. (Gentlemen, if you’re going to wear a hat, a well-shaped straw hat will go a long ways in life.)

We closed out the evening with a quick hit at the Wendy’s drive-thru–bacon cheeseburgers and salty fries hit the spot at midnight–before turning in. I had an early flight back to Austin, and Heather had some calls before returning north. We didn’t think that we could make a living off of being Lyle Lovett groupies, so we returned to our day jobs.